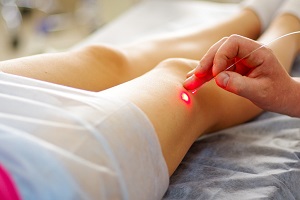 The number of varicose vein sufferers has been steadily climbing for years. Between the aging population and the growing incidence of obesity, more people are being diagnosed with varicose veins every year. According to the most recent statistics, nearly half of the adult population in the United States suffers from venous insufficiency, with more than 40 million having already developed varicose veins. The one upside to all this is that the medical industry has responded by revolutionizing the go-to treatments for varicose veins, and there are currently numerous viable options on the market.

For the past several years, endovenous laser treatment has been one of the most popular ways to treat varicose veins. Even though new treatments have emerged recently, endovenous laser ablation isn't showing any signs of waning in popularity. In fact, it's expected to grow in usage by more than seven percent over the next decade, with revenues eventually topping $500 million.

The key to endovenous ablation's success is that it's minimally invasive, virtually pain-free, can generally be done in under half and hour and requires almost no recovery time. Still, medical companies still think they can do better, leading to several new entrants in the field.

For example, Varithena is a sclerotherapy foam that's injected into the veins. Just like laser ablation, Varithena irritates the walls of the affected veins, causing them to collapse and eliminating the varicose veins entirely. Patients report high levels of satisfaction from sclerotherapy foams, leading to numerous companies creating their own formulas.

Still, other manufacturers are trying to think a little bit further outside the box. Recently, a treatment called VenaSeal hit the market. Unlike endovenous ablation and sclerotherapy, VenaSeal doesn't damage the vein walls. Instead, this system functions like a kind of glue that seals the walls of the vein together, cutting off blood flow and leading to the destruction of the varicose veins.

Similarly, another new device called ClariVein actually produces spasms in the affected veins. As a result of these spasms, the veins close off, destroying them and causing them to be reabsorbed by the body. Like the other new vein treatments, ClariVein is simple, and the pain level and recovery time is minimal.

As the market for vein treatments continues to grow, companies will continue looking for new, innovative ways to get rid of varicose veins. The only question is which one of these treatments will prove most effective and most popular with patients.

Back to Vein Articles »

Ready to Schedule a Consultation with Vein Treatment Forum?
Click here to fill out a short form.

What Vein Treatment Procedure May Be Right for You?

Please contact Vein Treatment Forum or call 877.836.8841, and we will find and assign a provider in your area to suit your needs. Fields with * are required fields.